There are exceptions to these laws in the United States. The minimum wage in Washington State is $11.50 per hour (as of 2018), while in California it is $11 per hour, and Oregon requires $10.75 per hour. Workers who are paid through tipping have a $2.13 federal minimum if they earn at least $30 tips for their shift, but their total wages must also equal the $7.25 per hour minimum standard.

Several minimum wage laws in the U.S. are set to make this wage become $15 per hour by the year 2023.

There are several advantages and disadvantages of a minimum wage for workers to review when looking at the effects of a guaranteed income when employment on society as a whole.

1. A minimum wage gives people an incentive to work.
Imagine a choice between working for $3 per hour and working for $7.25 per hour. If all things are equal in your situation, then most people would choose the job with a higher wage. When there is a minimum wage for workers, there is a baseline incentive which encourages people to work. That job knowledge gives them a skill over time which becomes more valuable to their current employer or a future one. Most people begin earning more in 12 months or less when they accept an initial position at the minimum wage.

2. Workers can live comfortably when the minimum wage meets their needs.
People offer better productivity when their core needs are met. If someone gets enough food to eat, has a home where they can rest, and can cover other basic essentials, then their focus goes to the work which must be done instead of worrying about making ends meet. Even though higher minimum wages create additional labor costs for organizations, the added productivity from the security that brings pushes revenues up higher too.

3. Minimum wage laws offer some level of job security.
Economies grow and contract in cycles. During a strong economy, there is a better chance to find a position which pays more than the minimum wage. When a weaker economy comes around, the minimum wage workers tend to be the ones who keep their jobs more often. There are basic needs a society must maintain to keep the quality of life standards high. Some jobs are “recession proof” because we all need certain items, like food, soap, or clothing. Even though the wages are comparatively low when compared to a national median, most workers can earn more with a minimum-wage job than they can on unemployment or welfare.

4. It works to create a workforce which is stable.
Minimum wage laws offer a guaranteed income for anyone who receives a job offer. If that income doesn’t meet their needs, many work-based assistance programs kick-in to help that person out. Several states offer incentives to people who work and can’t meet their basic needs, including healthcare coverage, supplemental food stamps, housing assistance, childcare help, and vocational development. People seek stability, so a job which makes that a reality means a lower turnover rate and fewer job training costs that employers must pay.

5. A minimum wage allows workers to invest in themselves.
When a minimum wage meets more than the basic needs, then it allows an individual to pursue their own goals, dreams, or interests. Many employers today offer educational assistance programs which pay for tuition or permit flexible hours to continue schooling. Workers save more when they have a little extra at the end of the month. People who earn more typically spend more, with local spending in the U.S. worth $1.78 in output for every $1 spent. Creating more opportunities with a mandatory wage means everyone sees a boost when the pieces fit together correctly.

6. It promotes local and regional economic growth.
American Express estimates that 43% of the money that is spent at national chain stores stays within the community. If someone purchases goods or services through a locally-run business, then 68% of the cash spent says to work locally for everyone. Those percentages still apply when the spending is for basic needs. Even if the cycle takes time to grow, the minimum wage will eventually filter down through each business to help everyone, including the workers earning the salary.

7. A minimum wage promotes societal equality.
People should earn more when their talents or skills are in-demand. Those who work hard and do a good job should make more than people doing just enough to get by. When a minimum wage is enforced, then workers have an option. They can train to make themselves a coveted commodity or work at a job which doesn’t challenge them personally, but it does meet their needs. The minimum wage allows people to better themselves without the same sacrifices that previous generations encountered.

8. Other worker protections typically come with a minimum wage.
When the U.S. passed the Fair Labor Standards Act of 1938, it did more than set a minimum wage for workers. It created several additional federal protections that employees received for the first time, including overtime pay, child labor restrictions, and recordkeeping requirements. Similar benefits are given to workers around the world because of their country’s minimum wage requirements too.

1. The wage must keep increasing for it to be relevant.
Once you set a minimum wage through law instead of market forces, then society must keep raising the rate that workers receive to keep pace with inflation. The last time the federal minimum wage went up was 2009, when it hit the $7.25 per hour level for the first time. Between 2009-2016, that wage lost 9.6% of its overall purchasing power due to the effects of inflation. When payment levels are adjusted for inflation, it was 1968 when the minimum wage held the most value.

That’s why some states in the U.S. have an automatic inflation adjustment tied to their minimum wage. It keeps the wage moving upward without new laws, but that also means employers are almost guaranteed an increase in their labor costs too.

2. It affects small businesses and low-skill laborers the most.
Enforcing minimum wage laws means small businesses are forced to pay a specific salary to their employees. Startups often run on a one-person show because they cannot afford the cost of having a worker. When a minimum wage is set too high, it forces the business to change the rates they charge. That reduces customer interest in what is offered, which could impact their overall revenue. By raising worker wages, it can lower economic output in some communities.

3. Raising the minimum wage doesn’t fix poverty.
The lowest-paid full-time workers in Australia make $18.93 per hour as of July 1, 2018. That’s roughly $13.50 per hour in the United States in comparison. Some industries in Australia require even higher wages, like the Fast Food Industry Award. Despite the high wages, about 14% of the population still lives in poverty, which is a rate similar to other developed nations in the world. Stronger economies do not guarantee better wealth. There must be worker education programs offered too, helping people avoid debt, make conservative investments, and save money for the society to benefit from the process entirely.

Most minimum wage programs make it possible to meet the bare minimum standards only. 66% of the population of Australia registers as being Middle Class. 38% of households in the U.S. make the same statement, yet the poverty rate is still the same.

4. Employers may look for cheaper options to replace minimum wage workers.
The era of artificial intelligence is arriving right now. When repetitive jobs are complete by automation, robots, or the customers themselves, then it is the minimum wage worker who loses their job first. Cashiers at grocery stores and locations like Walmart are consistently replaced with self-checkout lines handled by one employee. New technologies look to automate functions from order placement to fulfillment. In the U.S. alone, over 500,000 net jobs could be lost because of AI within the next decade.

Is it better to have a job that doesn’t pay well than not have a job at all?

5. A minimum wage shifts the economic foundations of local communities.
If someone is guaranteed an income without working, then there is little motivation for them to work. When a minimum wage guarantees a specific income, workers become motivated to do only what they must to maintain their employment. Organizations which focus on capital generation receive the rewards under this structure, while the companies in labor-intensive industries endure consistent penalties.

The primary complaint of business owners which pay at or just above the minimum wage is a lack of qualified workers. People aren’t satisfied with the minimum wage. They want more, so they pursue opportunities to earn more. Some companies can’t afford to keep pushing wages higher to keep people, which means they must keep finding new workers to fill in the gaps.

6. Minimum wage laws encourage more offshoring or outsourcing.
Imagine a worker who makes clothing in a manufacturing position in the United States. Their full-time annual earnings would total $15,080 if they’re compensated at $7.25 per hour without any over time. Although that compensation is relatively low by U.S. standards, the employer looks at what a worker with similar skills earns in Bangladesh in comparison, which is now set at 8,000 taka, or about $95 per month. By offshoring their business, they’ll save over $13,000 per year on labor by hiring at the minimum wage in Bangladesh.

When companies must pay a forced minimum wage because of current legislation, they’re encouraged to save labor costs wherever they can. That causes them to look for offshoring opportunities, outsourcing to freelancers, and the use of independent contractors instead.

7. A minimum wage increases the cost of items.
When Oakland, CA raised their minimum wage to $12.25 per hour within city limits, the cost of a cup of coffee went up by 20%. Chicago coffee shops saw a 6.7% increase in price when their city-based minimum wage rose to $10 per hour. The requirement to pay workers a specific salary creates the need to offset those costs in some ways. Businesses will either increase prices or reduce the size of product offered. Purdue University found that a rise in fast food salaries to $22 per hour would reduce the size of a hamburger by 70%. 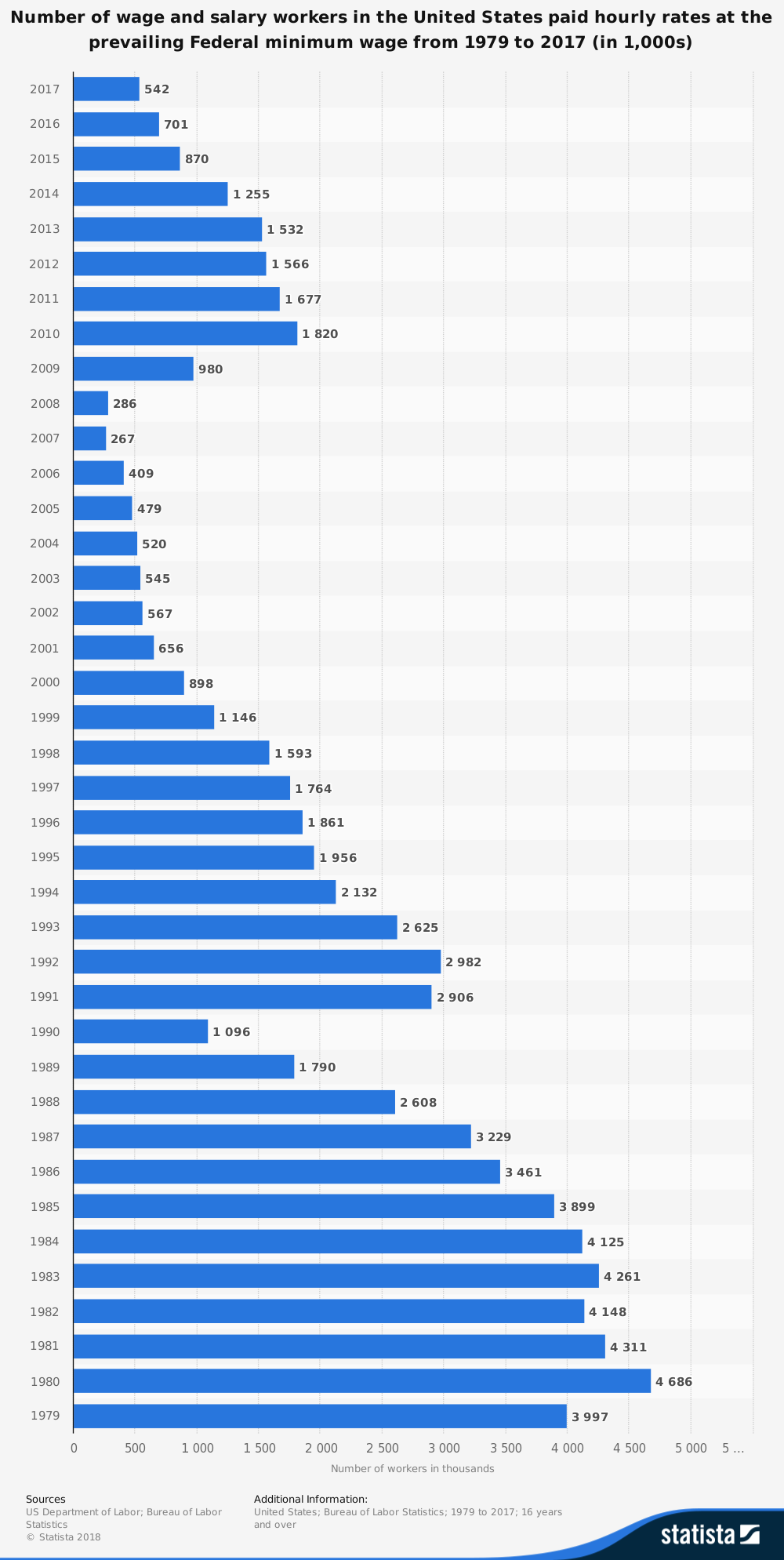 The advantages and disadvantages of a minimum wage for workers must take into account the needs of the individual, the employer, and society to create a balance. People who work full-time should earn enough to meet their basic needs. If they cannot do so with that job, then that isn’t a reflection of their skills or a desire. It shows that other elements in society may need adjustment too.